Predictions for the year 2122 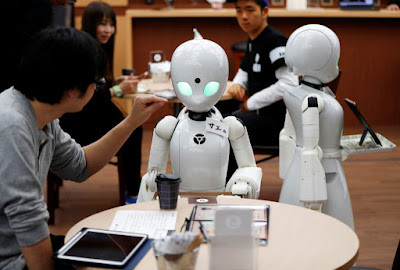 In 1922, author W. L. George wrote:
"There is a good old rule which bids us never prophesy unless we know, but, all the same, when one cannot prophesy one may guess, especially if one is sure of being out of the way when the reckoning comes."

"I suggest a picture of this world a hundred years hence, and venture as my first guess that the world at that time would be remarkable to one of our ghosts, not so much because it was so different as because it was so similar. In the main, the changes which we may expect must be brought about by science."

"It is easier to bring about a revolutionary scientific discovery such as that of the X-ray than to alter in the least degree the quality of emotion that arises between a man and a maid. There will probably be many new rays in 2022, but the people whom they illumine will be much the same... I am convinced that in 2022 the advancement of science will be amazing, but it will be nothing like so amazing as is the present day in relation to a hundred years ago. A sight of the world today would surprise President Jefferson much more, I suspect, than the world of 2022 would surprise the little girl who sells candies at Grand Central Station. For Jefferson knew nothing of railroads, telegraphs, telephones, automobiles, aeroplanes, gramophones, movies, radium, etc.;"

To follow up on the predictions made by W. L. George, I am going to make an educated guess as to what things might be like in the year 2122. The problem is that it is not hard to see where trends will take us over the next 50 years, or to a much lesser extent to the year 2100, but new trends will emerge that we cannot predict, making any prediction about the year 2122 far from complete.

For example, George knew nothing of computers, the Internet, and how they would change the world. He knew nothing about television, but he did imply that new communication methods would be possible.

Unlike the prediction made by George about the year 2022, technological change will accelerate over the next hundred years to such an extent that our ghosts might find the world unrecognizable a hundred years hence. Within 50 years machines will be smarter than people, but even before then, they will help us develop new technologies at a faster pace. We will see huge advances in material science, medical technologies, energy, and anything digital. Medical technology will improve our health, our mental state, and our abilities. It is very likely that in the year 2122, people will age very slowly or not at all.

All transportation will be automated. Airplanes will not need pilots. Cars, trucks, trains, and ships will not need drivers. A driver's license will be a thing of the past.

Unfortunately, most jobs will also be automated, with a fraction of the population supervising the machines that do all the work. Society will have to be reorganized, with many people not being able to obtain work. This could create great political turmoil, along with booms and busts and financial collapses, causing a few nations to fall apart and reorganize into something else.

War will not go away, but it will be mostly carried out by machines. It is very likely that nuclear weapons will be used over the next century, with devasting consequences over large areas, which will greatly increase the need for defensive systems.

Most fossil fuels will be gone by the year 2122. The future will depend upon whether we can develop nuclear fusion, which is likely. If so, we will have abundant relatively-clean energy, although not necessarily cheap at first. If we can't develop cost-effective nuclear fusion, and this is a distinct possibility, then a hundred years from now we will be facing energy shortages, and relying mostly on nuclear fission power and some coal, while maximizing renewables which by themselves won't be nearly enough to supply all our energy needs. Every home and business will have solar panels. We will see more windmills, more hydroelectric, and more geothermal energy production.

Material science might solve the energy storage problem, but maybe not completely. We might also have to rely on synthetic fuels, because this may be the most efficient energy storage method.

Natural resources will become more strained and therefore more expensive. The world population will expand slightly, level off within decades from now, and then slowly decline as resources become more scarce.

People will find their behavior more tightly controlled, not just by the government, but also by other people. Surveillance will be everywhere, including in the home. Crime might become impossible to get away with, but personal freedom will suffer. I predict that there will be a backlash against this, and perhaps a political movement to protect privacy.

Movie theaters will disappear within decades. Movies will be more like video games, or video games will replace movies altogether, with the user participating in the story, possibly with multiple endings depending upon the choices the player makes. Realistic virtual reality should be possible, with many people spending most of their lives in virtual reality. Some stories could take weeks to finish.

More computer technology will be integrated into people, allowing them to experience augmented or virtual reality, and increase their access to information.

People might choose robotic pets, or even virtual ones, which could be made realistic but easier to care for. Robotic pets might have additional features, serving as crude household robots, in addition to the other household robots that people will most certainly have in a hundred years' time. Some people will have robotic friends which will provide emotional support almost as well as a person, if not better. And they will have relationships will robots.

"Reality" in the future is going to be much less real, with people spending much time in virtual worlds, having artificial companions, and experiencing the world through augmented senses.